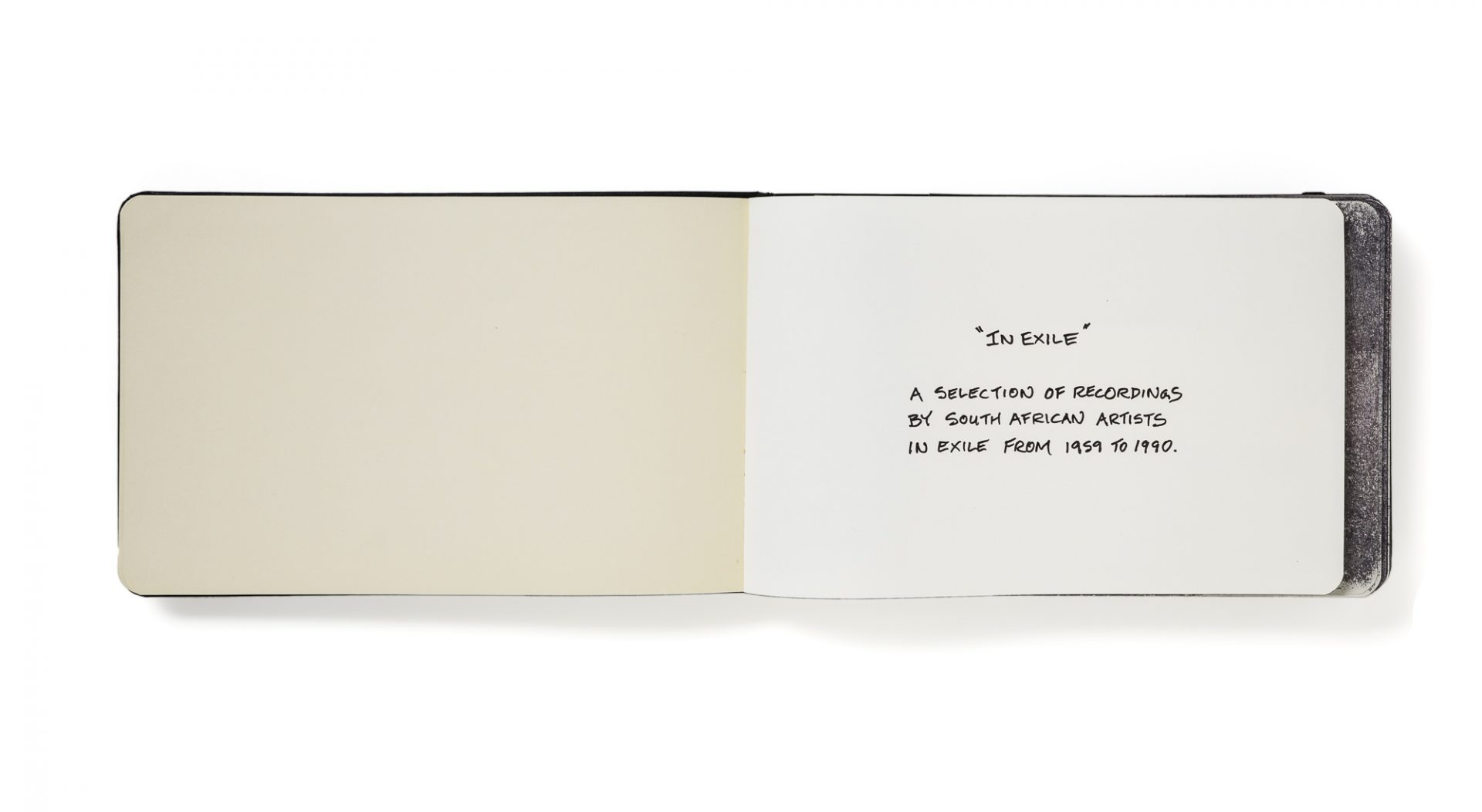 “In Exile. A selection of recordings by South African artists in exile from 1959 to 1990”.

For the past ten years I have been exploring through a number of varied projects the idea of a history of South Africa outside itself. The premise of the research involves the idea that individuals (as well as artifacts) leave the country for a range of complex reasons and thereafter exist in an external space. Often these individuals (and the histories they embody) remain unrecognized or forgotten in South Africa. My goal has been to mine and collate the information and to return it in some form back to a current audience. In many ways this Moleskine notebook is part of one of these projects and features a cross-section of mostly South African music in exile. For purposes of definition, exile music here covers a thirty-year period from 1959 to 1990, during the heart of the apartheid years. In the book I have arranged chronologically selected labels of recordings by South African artists made while they were in exile during this period.

The book also includes two compilation CDs. This additional survey is by no means comprehensive, nor is it representative of all South African exile artists or even their ‘best’ work. Rather it is a collection of some of my favorite, more personal tunes. Works that for me capture some of the darker but also more ecstatic moments of exile. The alienation, isolation of the foreign experience is evident on many tracks, especially the solo performances. But at the same time, so are fragments of cultural memory, various phrasings, quotes of the majuba sounds of the 1950s, that instantly recall a distant home. Often the fragments give way to moments of ecstatic joy and build in strength to challenge the darkness.

For more on the music represented in the book and CDs visit Electric Jive here:
http://electricjive.blogspot.com/2012/03/in-exile-volume-12.html.
For more on South African music in general visit: www.flatinternational.org.

Siemon Allen is a South African artist who explores issues of South African identity and branding through the accumulation, configuration and display of historical artifacts. While in South Africa, Allen was a founding member of the FLAT gallery, an artists’ initiative that operated in Durban during the politically significant period from 1993 to 1995. For the 1997 2nd Johannesburg Biennale Allen presented a large-scale architectural installation of woven VHS videotape in the South African National Gallery. His work has been exhibited widely in the United States and South Africa. Major exhibitions include Stamps at the Renaissance Society in Chicago, Artists Space in New York City, and the Corcoran Museum of Art in Washington; Newspapers in The American Effect at the Whitney Museum, New York City, and A Fiction of Authenticity at the Contemporary Art Museum in St. Louis. In 2009, expanded versions of Stamps, Newspapers and Records were shown in the solo exhibition Imaging South Africa at the Durban Art Gallery and Bank Gallery in South Africa. His Tintin collage work Land of Black Gold is currently on view in Found in Translation at the Deutsche Guggenheim in Berlin. Siemon Allen is a visiting professor in the Department of Sculpture + Extended Media at Virginia Commonwealth University in Richmond, Virginia, USA.

“My work reflects a number of distinct, but interconnected activities,” says Siemon Allen. “I collect, organize, and display artifacts. I sample sounds from various media sources and re-configure these to produce audio works, some integrated into sculptural works, and others covertly presented in specific sites. I construct large hand woven panels with cast off movie film or videotape that operate between painting and architectural enclosure. I design and produce limited edition artist’s books. The thread that runs through all of these seemingly varied practices is my need to reconcile my interests in the world of the political with the language of the aesthetic. I try to approach any given project with an attitude of detached research. I want the social critique that inevitably arises out my work to operate subtly and to reflect what I see as the contradictory and complex nature of South African identity. Ironically, much of my work is the result of my being in the United States, where I find myself looking at the image of South Africa as I might reconstruct it—through historical artifacts (stamps), through current media (newspapers) or through received audio (collected sound works). To some extent it speaks to what I feel is a kind of separation from the source, and leads me to consider how much of this work is, at its core, an investigation into notions of branding and identity through displacement”.