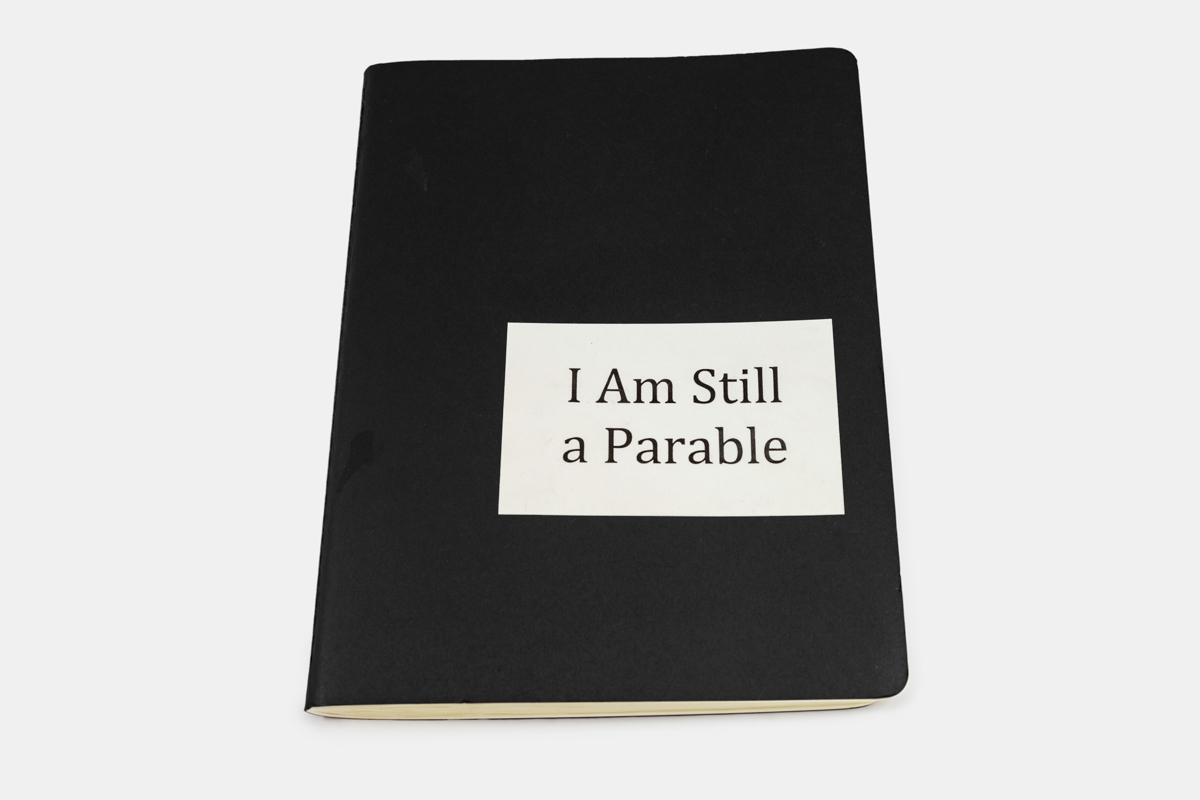 I Am Still a Parable

The ‘I Am Still a Parable’ notebook is a book of thinking aloud, testing the relationship of images and text. It is a record of process, rather than having any intended meaning. It gathers scraps of images and text from the studio, and as in many of my notebooks, is a mix of unused space and thoughts accepted and abandoned.

William Kentridge is internationally acclaimed for his drawings, films, theatre and opera productions. His method combines drawing, writing, film, performance, music, theatre, and collaborative practices to create works of art that are grounded in politics, science, literature and history, whilst still maintaining a space for contradiction and uncertainty. His aesthetics are drawn from the medium of film’s own history, from stop-motion animation to early special effects. Kentridge’s drawing, specifically the dynamism of an erased and redrawn mark, is an integral part of his expanded animation and filmmaking practice, where the meanings of his films are developed during the process of their making.

Kentridge’s work has been seen in museums and galleries around the world since the 1990s, including Documenta in Kassel, the Museum of Modern Art in New York, the Albertina Museum in Vienna, Musée du Louvre in Paris, Whitechapel Gallery in London, Louisiana Museum in Copenhagen, the Reina Sofia museum in Madrid and the Kunstmuseum in Basel.

Opera productions include Mozart’s The Magic Flute, Shostakovich’s The Nose, and Alban Berg’s operas Lulu annesburg (South Africa) 1955. Artist.nd Wozzeck, and have been seen at opera houses including the Metropolitan Opera in New York, La Scala in Milan, English National Opera in London, Opera de Lyon, Amsterdam opera, and the Salzburg Festival. The Head & the Load, with music by composer Philip Miller and Thuthuka Sibisi and choreography by Gregory Maqoma, interweaves music, dance, projection, shadow-play and sculpture. It premiered at the Tate Turbine Hall in July 2018 and went on to the Park Avenue Amory in New York and the Holland Festival in Amsterdam.

In 2016, Kentridge founded the Centre for the Less Good Idea: a space for responsive thinking through experimental, collaborative and cross-disciplinary arts practices. The Centre has quickly gathered momentum and, in 2020, launched a mentorship programme.

Kentridge is the recipient of honorary doctorates from several universities, including Yale and the University of London. In 2010, he received the Kyoto Prize. In 2012 he presented the Charles Eliot Norton Lectures at Harvard University. In 2015 he was appointed an Honorary Academician of the Royal Academy in London. In 2017, he received the Princesa de Asturias Award for the arts, and in 2018, the Antonio Feltrinelli International Prize. In 2019 he received the Praemium Imperiale award in painting in Tokyo.