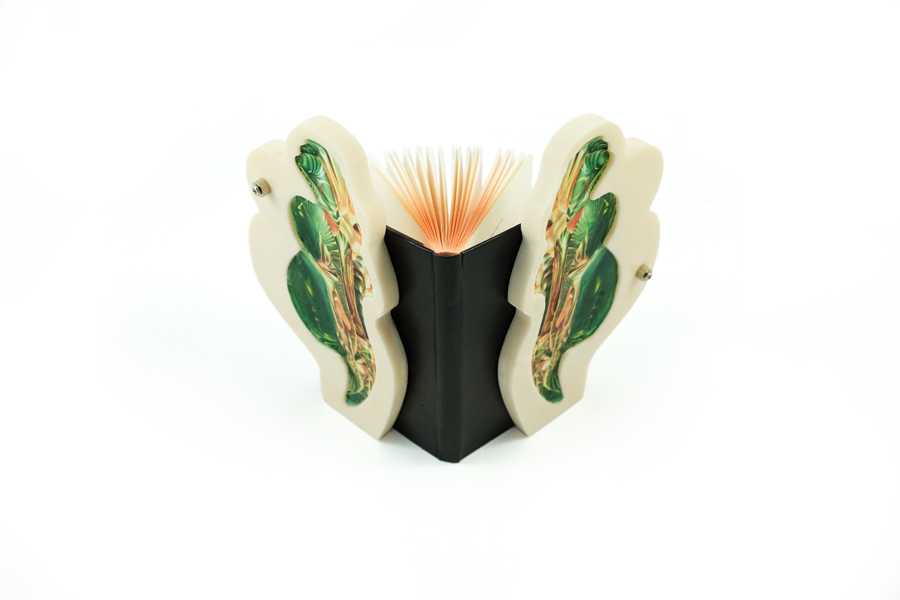 Acid Thoughts on Liquorous Skin is a sculptural transformation of the Moleskine notebook, revealing it as an inherently imaginative object rather than a writing support. Two wings made of galalith – a polymer material created out of milk by the artist – reveal within them a supernatural, almost bionic entomological organism. The inside of these beige pages is tinted with an orange border reminiscent of a beating heart. All the elements of this work tend towards the metamorphosis of an inanimate tool into a living machine; a frequent transformation process in Salomé Chatriot. To the question “What comes first”, she answers with the incandescence of electricity animating the world of living beings and milk-producing machines.

After graduating from the Swiss University of arts and design of Lausanne, She has been working from Paris as a contemporary artist and an mutimedia interaction designer. Following a residency at La Totale (Galleria Continua) in 2018, she began exploring Fragile Ecosystem, a vast polymorphic landscape born from her imagination. Afte rexhibiting in New York (The Shed Museum) and Basel (HEK), she presents her solo show “Calcium Thirst” at New Galerie (Paris) in 2021 concluded with a breathing performance.