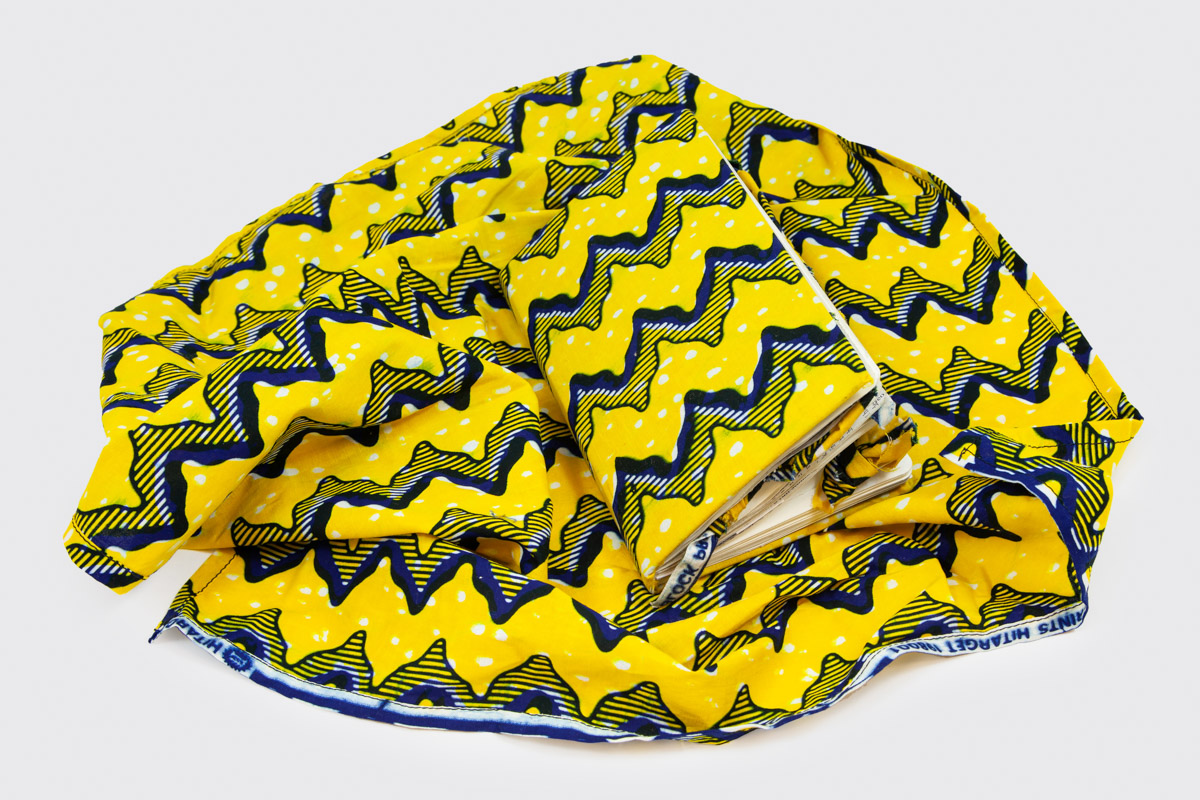 I have been pursuing photography in recent years, capturing everyday moments of people of African origin living in the central regions of Italy.
An important part of the modern African Diaspora can be found in The African diaspora population in Italy. In an aim to represent a different perspective, a more constructive, positive approach was taken, a new reality, in which the African refugees, migrants, and immigrants, who are often portrayed as victims of the society, are represented differently. By capturing the soul and underlying their values and lives, an invisible reality is empowered and finally become visible to the world.

The Moleskine symbolizes the 20th-century immigrants from Africa in Italy, the Italian born children of immigrants (second generation) and the process of migration as a complete successful succession of experiences.

The Moleskine is covered with African wax fabric. Indeed, the whole notebook is decorated with images, collages, and texts.

Karima 2G is a Liberian – Italian singer, rapper, dancer and beatmaker. She began her career as a dancer and became a professional emcee and speaker of the major Italian clubs. Indeed, working with the leading Italian electronic, dance, house music station M2o, she became one of the official voices and the backbone of the network’s events. In 2013, after rediscovering her roots through a journey back to her homeland, Liberia, Karima 2G became the director of an orphanage in the capital, Monrovia. Once back in Italy, she used music as a medium to bring out the values of her culture of origin from an Italian perspective, focusing on the integration of the second generation in Europe. In 2014, she released her solo debut album 2G (Soupu Music) which was entirely written and produced by herself. She combines electronic elements, urban bass music and grime with afro influences. Her style of singing and rapping incorporated English and pidgin English, which is her mother tongue. The videos of the first two singles, “Orangutan” and “Bunga Bunga”, emphasized the power of the album in its both sounds and texts made in a crucial historical moment and caused public reactions and critics. Afterwards, the attention of the media multiplies when someone brought up the name of M.I.A.: from music magazines as Rumore and Blow-Up, passing to online newspapers, such as Corriere della Sera and Il Fatto Quotidiano, fashion magazines as Vogue.it and the Swedish magazine Bon Magazine, to the African session of the US original progressive urban music site Okayplayer.

In 2016 she published Africa, a song that represents the boundary between the first part of her artistic career, which focused on the topic of the second generation in Italy, and the second part of her career which creates most international issues. After publishing the video of Africa, in 2018 she published Malala, the same name of Nobel prize for peace, Malala Yousfzai, and of Malalai Anaa, the heroin of the 19th-century Anglo-Afghan battle of Maiwand. In her song, Karima 2G talks from the perspective of an oppressed Afro-Italian girl, who decides to free from a status of ignorance and to face the evil. Karima 2G is now heading back into the studio to work on her next songs.