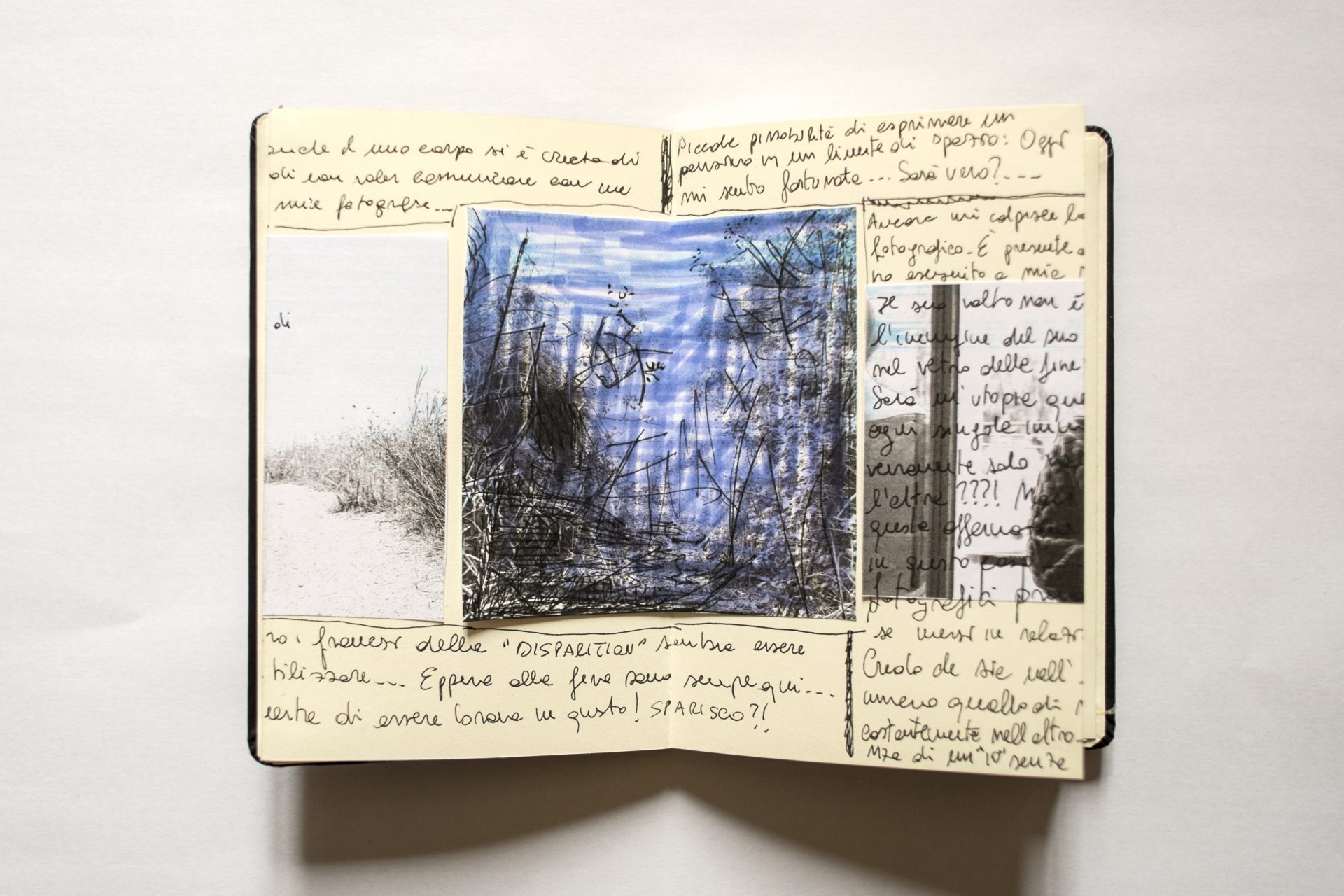 Something that (deeply) belongs to me

The notebook represents the flow of consciousness between myself, my words and the photographs (mine or the ones I found). The journey has no limits, just as the internal dialogue flows without interruptions or without any direction. As a well-written, and even better acted out, theatre piece, this diary represents the internal moods of the traveller, who is very distracted and yet, tuned in.

Francesca Loprieno is a photographer and visual artist who lives and works between Italy and France. She shares her artistic photographic acrivities whit frequent collaborations both in the theatrical ambit, in the field of video-art. Whit a degree taken in the Fine Arts Academy of Rome, she completed her learning attending a large number of seminars and courses of professional training mainly in Rome and Paris. For the École Nationale Supérieure des Arts Décoratifs (ENSAD) of Paris, in the 2010, she carriers out a photo and video graphic research about the immigration problems in the parisian banlieues.
She has finished a Master in «photography, Video and Theatre for artistic mediation» at the Antonianum University of Rome. She is co-founder of the cultural association «Museo di Cartone», an itinerant structure engaged to create artistical-didactic laboratories for children and adults. She has directed laboratories of Art-Terapy and Photo-Terapy in public and private centers. One of her projects, “Soi meme pourtant”, was selected to be exhibited in the Museum of the Immigration History in Paris. In June 2011 one of her works named “Identi-kit” was exposed at the 54th International Art Exposition the “Biennale di Venezia”.
In her projects she prefers using the languages of photos and videos in order to analyze social problems such as the human inadequacy to accept and to adjust him/herself to the modern ordinary empty spaces, along with the loss of him/herself and human rights, problems often related to the experience of the journey. The journey conceived not only as crossing through a physical space but also as a mental act involving personal and collective memory, an occasion in which there’s the loss of senses and the awareness of time, which no longer belongs to the interiority of the individual, but becomes an essential condition of life. In the meantime she takes part in a great number of group (National Gallery di Cetinje/Montenegro, Piramida di Tirana/Albania, Museum of Contemporary Art di Rijeka/Croazia, 2015) and solo exhibitions (SI FEST Savignano Immagini, 2015, Italy) in galleries and institutions all around the Italy and abroad. She currently teaches “Theory of visual perception and planning” in the school, institutions and associations for the promotion and photographic culture and she organizes courses of Art-Terapy for institutions, firms and centers of psychotherapy.