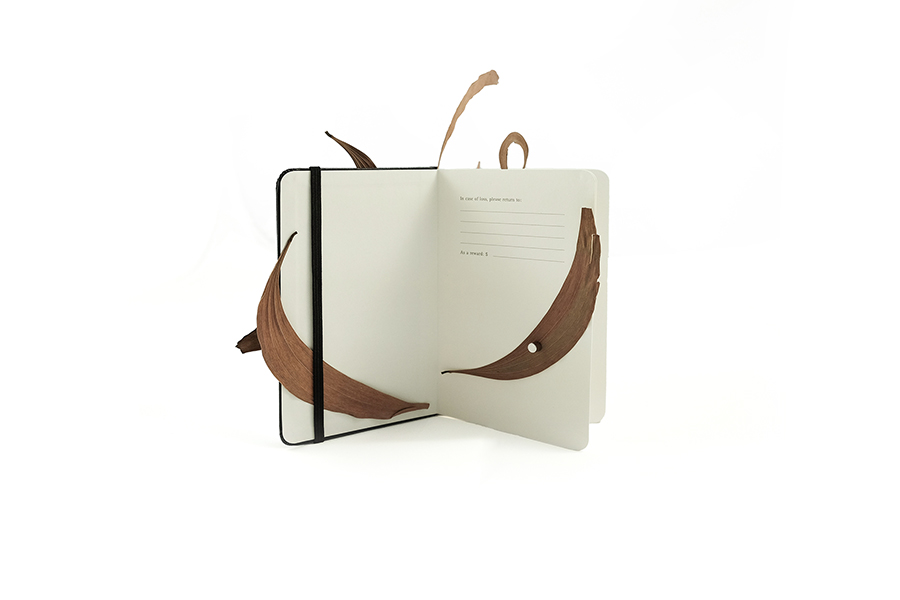 Refining correspondences and experimenting the hooks of the notebook, Collecting and bringing together heterogeneous elements, Leaving the Moleskine open to further attempts and exchanges, To bring out something from the previous nature of the notebook: lineage, framework, ramage of the vegetal. Activating the pages, to begin the seeing anew, Playing a small theatre of the laws of attraction, Finding the motive, holding in balance what was on the ground, To give the desire to continue the gesture. So, provisional forms. With the conciseness of the minuscule, the majesty of the not much, of the nearly nothing. The small magnets and upright coins augur the movement of the leaves. The combinations gleaned are the letters of an elementary alphabet: Coin Paper Twig.

Born in Paris, Émile Kirsch, artist and designer, spans the worlds and fields of creation: objects, painting, sculpture, photography. After literary training at Lycée Henri IV, he continued his studies at ENSCI-les Ateliers where he refined his practice alongside François Azambourg and the Formafantasma studio. Since 2015, he has been studying bird nests to consider the creation of another point of view and these investigations have brought him to meet the practice of personalities such as Tim Ingold and Andrea Branzi. Other encounters led him to the savoir-faire of the workshops of petit h – maison Hermès, or even to various corporations of Colombian craftsmen to deal with the unknown and the unforeseen, constraints and existing resources.