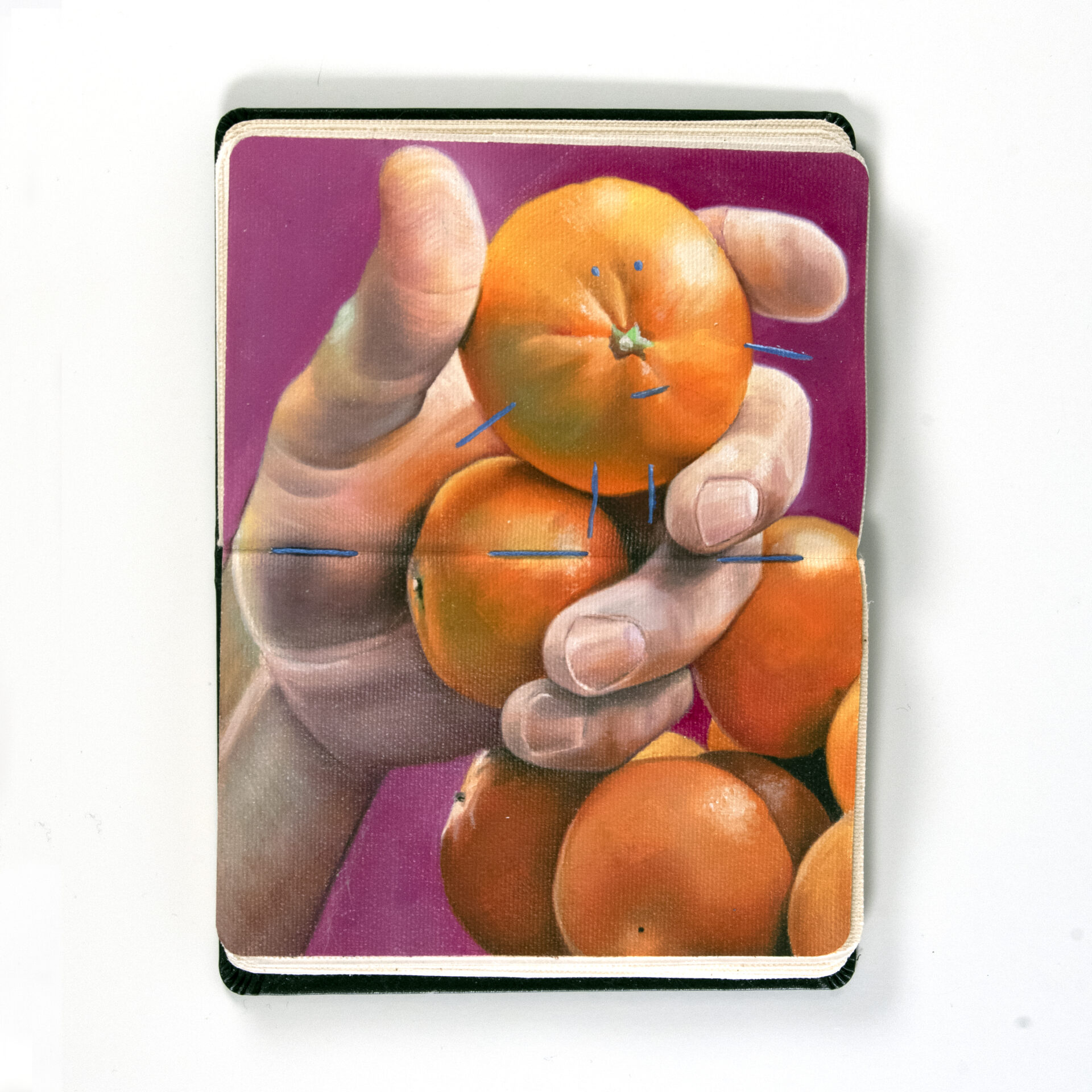 I’m interested in the way a physical piece of art functions in today’s world as a simple but powerful communication tool. Because it exists outside of the (sometimes deafening) online cacophony, a physical object can prompt us toward our inner dialogue / questions / emotions without immediate access to crowdsourced opinions. Sometimes it’s just a simple grounding- a hand holding oranges, and yet the world-wide reach still exists because when someone stands right here in front of this work, the viewer and the artist get to communicate. Right here. Right now. Art behaves as a radical conduit and connector in this way. This notebook has been taken apart and put back together with different materials- the paper replaced with canvas; the neat stitching replaced with bulky blue thread. It’s an exploration or exercise on how sometimes the only way to shift our understanding or enact change is to deconstruct what is in front of us and put it back together in a new way. It is now something that is both strong and gentle. But also funny. Because joy is powerful.

Elizabeth Bergeland is an American painter and illustrator living and working in Philadelphia, PA. Elizabeth received her BFA in painting alongside Anthropology from the University of Colorado in 2006. Working primarily in oils, Bergeland’s large-scale paintings often feature realistically depicted figures alongside heavy symbolism, placed in imagined, colorful spaces. At the core of her work is the search for nuance and unspoken double standards alongside a desire to keep curiosity and a sense of humor intact. Recently, her work has turned toward the topic of masculinity and how we, as Americans, are raising our boys. Initiated by the desire to simply “try on” a reversal of traditional roles by instead placing men’s bodies in the canvas from the vantage point of the female gaze, Bergeland is asking what it means to, “be a man” and discovering the myriad of ways that masculinity hurts men too. She has exhibited her work nationally and has been notably featured in Artit Magazine, Create Magazine, Friend of the Artist, Philadelphia Magazine, The Visionary Projects, Fuerteventura Times and Design Sponge. She is the illustrator of Being Edie is Hard Today (2019), and The Great Whipplethorp Bug Collection (2021) with publisher Little,Brown. She lives with her husband and three children.