“ «Do you react as a written subject or a writing actor?»

For many South represents a movement through a gateway, a door leading forwards through life but also a window into the turbulent emotions of the past. It’s metallic, firey, wet, invisible, musical, hinged, tactile and orange. All at once.”

AtWork London Chapter 18 has been implemented by Moleskine Foundation in partnership with Young People’s Programmes at Tate Modern.

The workshop was enriched by the collaborations of various professionals, among which Adepero Oduye, Nigerian born and NY based actress, director and writer that assisted Simon Njami in conducting the workshop. Artist Leo Asemota was presenting his methods of work and development of ideas to the participants in an inspirational moment during the workshop. Anna Mainenti, the photographer with her project Made-Hand documented the workshop and Teresa Soldini, phycologist and AtWork Venice participant, was acting as the workshop observer.

Simon Njami comments on the topic: “The word ‘South’ may seem to designate a precise point, but upon reflection, we realize that this is totally inaccurate. Let us try to liberate the four points of the compass from any ideology and reconsider them for what they are: directions. If we succeed in doing so, we will rediscover that South and North do not exist as such; rather, their meanings become activated through our way of thinking. No matter where we are, there is always a ‘South.’ Therefore, we hold the power to define its meaning: ‘South’ begins with us.” 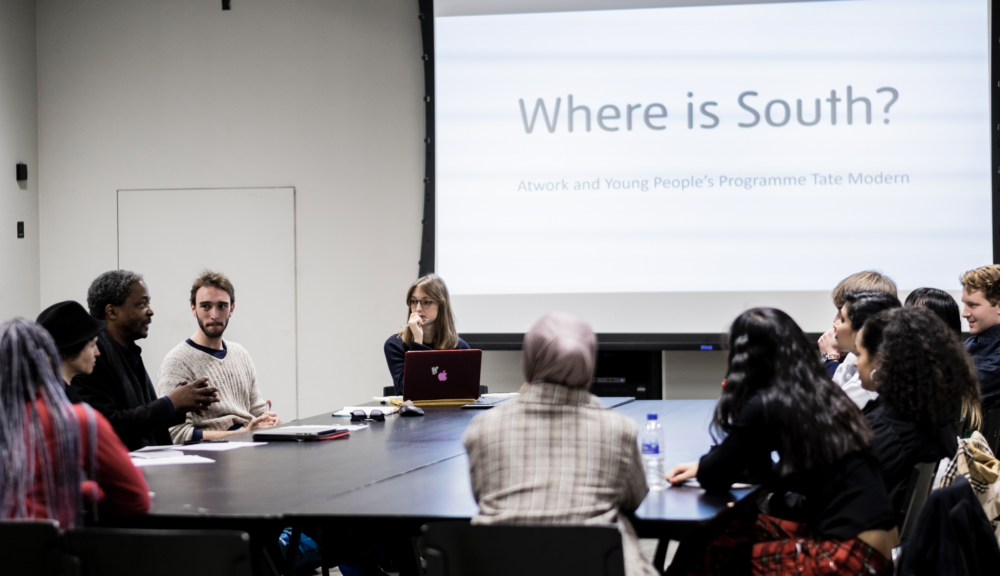 The workshop took place at Tanks Studios at Tate Modern in London, UK on November 25th-29th 2019 and was conducted by AtWork advisor Simon Njami. Under his leadership, 11 young creative talents from UK and Italy got together to debate, critique and exchange about what “South” really meant to them. Composers, film directors, jewellery designers, lawyers, geographers, students and artists met for the first time to enjoy an opportunity for discussion and mutual exchange.

The participants also had a chance to view Tate Modern’s Collection and current exhibitions to get inspiration and further stimuli for the discussion.

The creative outcomes of these reflections were spilled out on a notebook by each participant and these 11 artworks, inspired by their personal “South”, will be exhibited as part of the final international exhibition of “Where is South?” Tour in 2020. 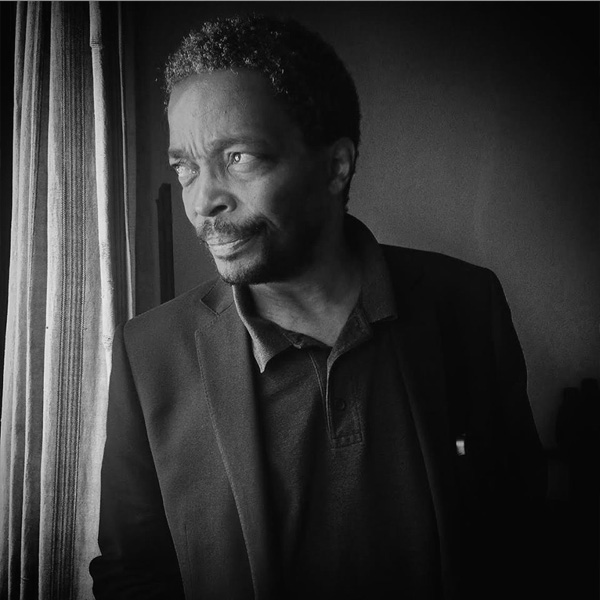 Simon Njami is an independent curator, lecturer, art critic, and writer. He is the co-founder and editor-in-chief of “Revue Noire.” Previously, Njami was the artistic director of the Bamako Photography Biennial 2000-2010, and co-curator of the first African pavilion at the 52nd Venice Biennale in 2007. He has curated a number of contemporary art and photography exhibitions, including Africa Remix (2004-2007) and the first African art fair in Johannesburg in 2008. In 2014, The Divine Comedy exhibition, created and curated by him, started a world tour at the MMK (Museum für Moderne Kunst) in Frankfurt, moving on to the SCAD Museum of Art in Savannah and the Smithsonian Museum of African Art in Washington, DC. He is the director of the Pan African Master Classes in Photography, a project created in partnership with the Goethe Institute; artistic director of the Donwahi Foundation (Abidjan, Ivory Coast); advisor to the Sindika Dokolo Collection (Luanda, Angola); secretary of the special jury of the World Press Photography Awards; artistic director of the first edition of Off Biennale (Cairo, 2015) and the 2016 and 2018 Dak’Art. 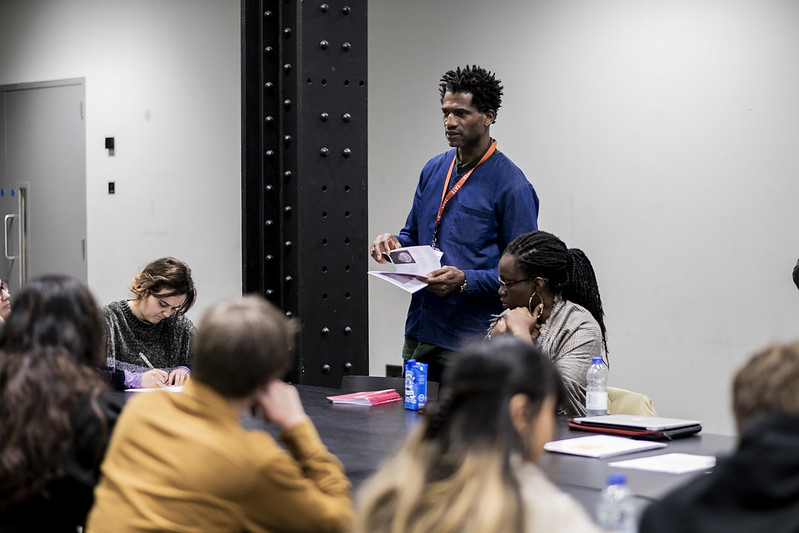 “My South is the fire burning at my feet. Bubbling my blood and boiling my bones. It’s uncontrollable and burning hot. It’s me. It’s us. From birth to ashes. But we encompass it before we comprehend it, because only the sparks reach our head“

The workshop took place at the Tanks Studios of Tate Modern, where the participants had a collective discussion about what “South” meant to them. The workshop theme was the starting point for critical debate. Starting from the question “Where is South?” and conducted by Simon Njami, the participants began to wonder what this question actually represented:

“For many South represents a movement through a gateway, a door leading forwards through life but also a window into the turbulent emotions of the past. It’s metallic, firey, wet, invisible, musical, hinged, tactile and orange. All at once. As you’ll see, South is not one place, it’s suspended in the air, tied down with chains, concealed with fabric, and bursting from the pages in which it was constrained. South has no fixed embodiment, it’s a black and white act of protection and opposition. A vivid orange reminiscence of the past and burning desire, or an unstructured intersection of different paths realised through mixed media. But fundamentally, these objects are all connected. Each piece is built from the inside out. They represent the shedding of our skins and the exposure of our cores.

We all moved as a collective towards an undefined goal. When we started, we had no clear direction, but we connected in fleeting and unexpected ways. The path we lead you on invites you to join us on this journey into the unknown. We found our South for now, but there are many more Souths to find.”

Concurrently to workshop, Moleskine Foundation participated in Glug’s November “Creativity can save the world”, an event held for over 550 creative workers on November 28th in Shoreditch.

Attendees were also be invited to take part in a creativity challenge, an extension of the London AtWork workshop. Two works from the winners of the challenge will be selected to be included in the “Where is South?” final international exhibition, which will be a culmination of the international AtWork journey bringing all the creative outputs of all the workshops together in one final showcase to be held in 2020. 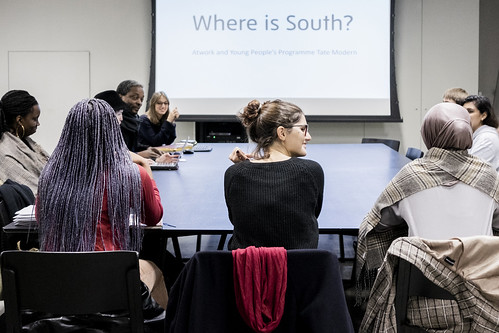 “11 random people came together in London thinking they would answer the question ‘’Where is South?’’. Little did they know they would be pushed to face themselves and be brutally honest with each other.” 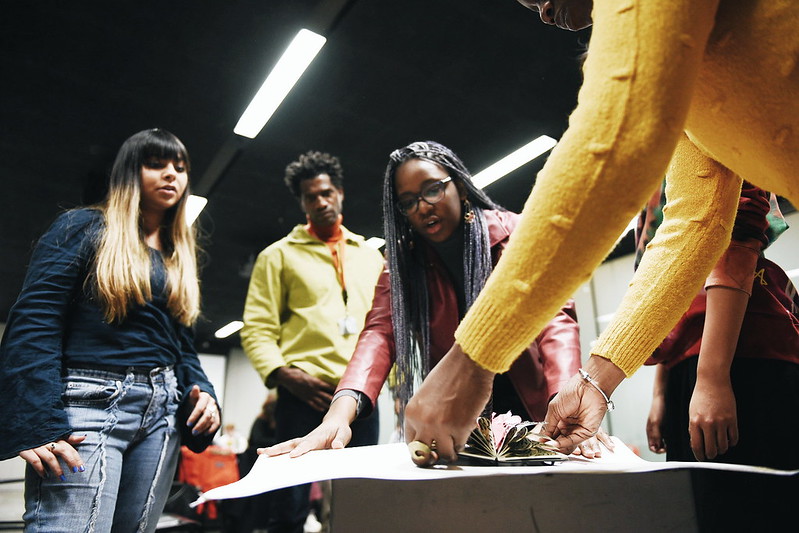 The AtWork London creative outputs display “Where is South?” is the result of a journey of self-reflection through which everyone has found their individual “south”. The Tanks Studio hosted the 11 notebooks, acting as a vibrant stage for this meaningful showcase, co-curated by the participants themselves. The works were the result of an intense physical and mental effort of the whole week.

The showcase was launched on the 30th of November and has been on display until the 1st of December. 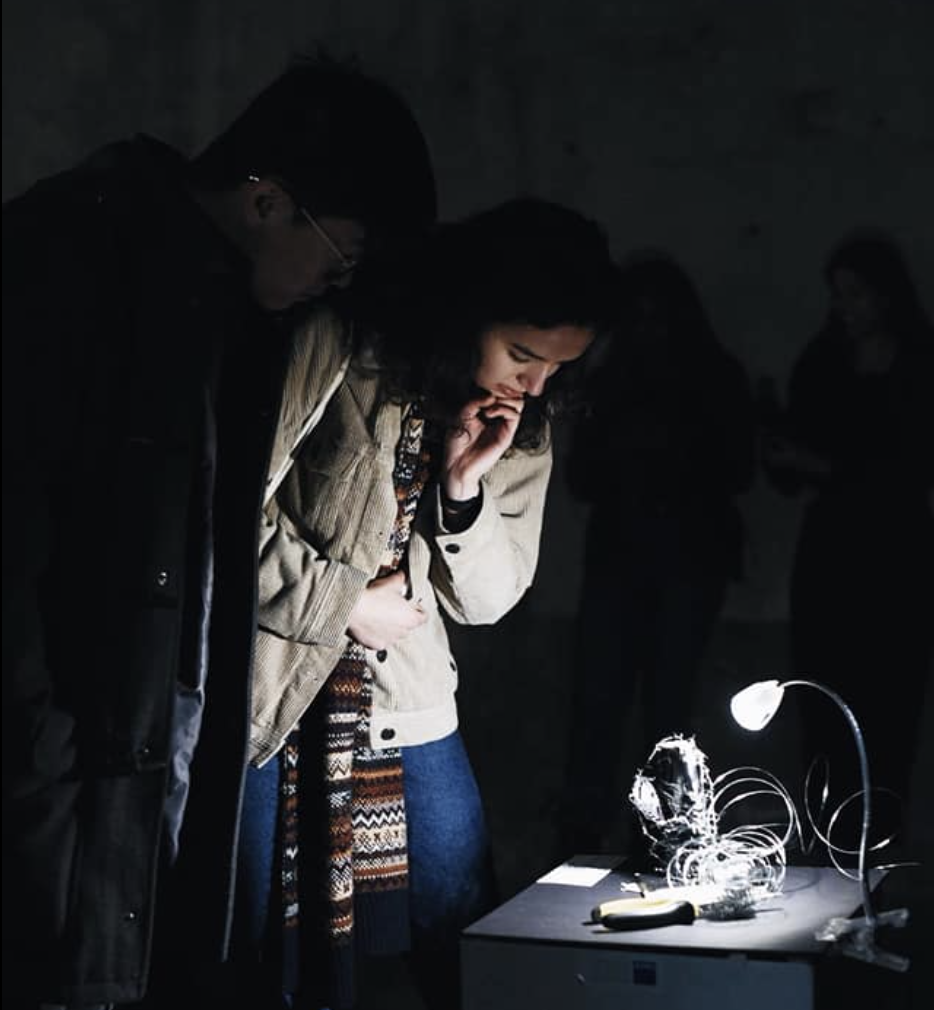 All notebooks from AtWork London Chapter 18