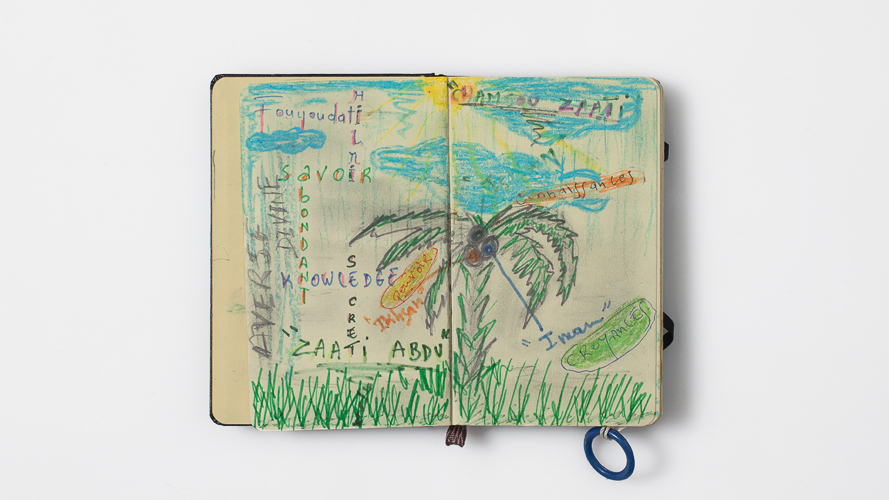 The artwork made by Boubacar Sonko comes across as really complex. His work is formed by two different notebooks which present a variety of techniques and develop an in-depth investigation about the several concepts discussed in the workshop. Both notebooks generate a philosophical and theological discourse about the main themes. The artist intersects government laws with Coran’s dictates and masters’ teachings to get to the deepest comprehension of ideas such as freedom, knowledge, democracy, responsibility and modernity. The first notebook presents a wide range of pictures and few inserts like pieces of glass and ropes, whereas the second one leaves more space to writing. In the latter one the artist specifies his position on the concepts listed above. Scanning the pages it’s possible to realize how the artist is influenced in his thought by the sufism, as he declares referring frequently about “Marifa” which is a kind of mystic and intuitive knowledge that represents the highest stage of knowledge in sufism. The artist shows his idea of knowledge as a sum of competences and beliefs which are thought exactly as the ability to understand intuitively the real essence of things. The artist also reflects a lot on the possibilities of the legal system to defend all the cultural and religious diversities that coexist in Senegal and he sees in this challenge, made by comprehension and acceptance, the way to get modernity and democracy. In the second notebook there are also specific references to the workshop. For example, the artist replies to Antonio Somaini’s text about the practice of gift, which is published in the AtWork Dakar’s booklet, explaining how the gift’s economy is a basic practice in Senegalese society. The notebook ends with the representation of Kër Thiossane’s garden which was the workshop’s location and is probably the most important center for the development of contemporary art and the diffusion of digital technology in Senegal.