“Who are my people?”

“We are trying to unlock that thing in the participants that will enable them to consider themselves human in the largest sense of it… and also to have a critical distance towards what they are living and experiencing on a daily basis.”

AtWork Douala Chapter 09 has been implemented in partnership with Galerie MAM and its founder Maréme Malong, and doual’art, the contemporary art center in Douala. AtWork workshop always tries to integrate into the artistic and creative texture of the country. This time it was part of the Off Program of SUD-Salon Urbaine Douala, a triennial event that brings together the artists, thinkers, philosophers, educators from the African continent and beyond. The 2017 edition, curated by Cécile Bourne Farell, was titled “The place of the human” and its particular focus was on young generations.

The workshop took place in Douala, Cameroon on December 05-10 and was led by the renowned international curator and our advisor Simon Njami, who conducted 22 local young creative talents through the AtWork process, reflecting on the main theme “Who are my people?” This seemingly simple question was the starting point for an intense collective discussion and a deep individual self-reflection, it pushed each participant to dig deeper and provided them with the tools to be more aware about who they are, what they do and what positive change they might produce in the society around them. At the end of the workshop each participant gave their creative artistic answer to the posed question by personalizing a notebook.

“What I have learned from this workshop is the humility. To know exactly the meaning of the words and notions before you say them.”

Simon Njami is an independent curator, lecturer, art critic, and writer. He is the co-founder and editor-in-chief of “Revue Noire”. Previously, Njami was the artistic director of the Bamako Photography Biennial 2000-2010, and co-curator of the first African pavilion at the 52nd Venice Biennale in 2007. He has curated a number of contemporary art and photography exhibitions, including Africa Remix (2004-2007) and the first African art fair in Johannesburg in 2008. In 2014, The Divine Comedy exhibition, created and curated by him, started a world tour at the MMK (Museum für Moderne Kunst) in Frankfurt, moving on to the SCAD Museum of Art in Savannah and the Smithsonian Museum of African Art in Washington, DC. He is the director of the Pan African Master Classes in Photography, a project created in partnership with the Goethe Institute; artistic director of the Donwahi Foundation (Abidjan, Ivory Coast); adviser to the Sindika Dokolo Collection (Luanda, Angola); secretary of the special jury of the World Press Photography Awards; artistic director of the first edition of Off Biennale (Cairo, 2015) and the 2016 Dak’Art Biennale (Dakar, Senegal), the first and most important artistic event in Africa.

“This AtWork experience has colored my entire future” 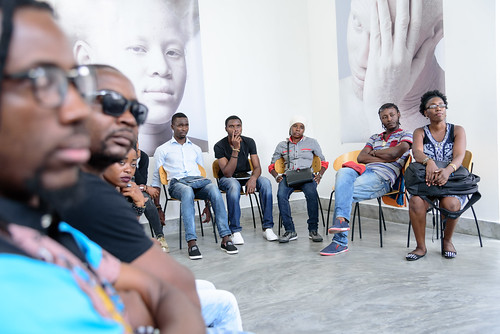 The workshop took place at the MAM Gallery in Douala, which was a perfect venue for the experience with its gallery space, the library and the outdoor garden. The participants started the collective discussion, which questioned their notion of “my people” through the debate, the presentation and critique of their artistic works and eventually the conception of their personal creative project on the notebook. The process that led from the constructed generic impersonal answers at the beginning to arrive to the deep investigation of their identity and centrality of the “I”, the personal, the “my”, the simplification that led to the essence. The experience was also enriched by the interventions of Nadine Bilong, one of the guest curators of Dak’Art 2016 Biennal and the visiting SUD artist Michelle Magema, who shared the vision of her artistic practice and in particular her experience of the performance at the SUD 2018.
The workshop was a unique occasion for the young artists to encounter, exchange and debate with their local peers as well as with international artists and curators.

“To have this intimate, very personal contact with the workshop conductor of Simon’s caliber, be able to discuss your personal work with him, get his direct input, critique and guidance, adjust your practice accordingly, spend time with him, this is a uniqueness of this workshop and the privilege that we don’t have at the university”.

The Moleskine notebooks created by the participants during the workshop have been exhibited at Galerie Mam. The exhibition was co-curated by the workshop participants under the supervision of Simon Njami. It inaugurated on December 12th and ran until January19th. The opening night welcomed the key protagonists of Douala artistic and cultural scene, the visiting international artists of SUD 2018, doual’art’s founder Princess Marylin Douala Bell, the 2018 edition’s curator Cecile Bourne Farell and local cultural aficionados. The AtWork participants did a small performance around the theme “Who are my people?” and shared their workshop experience with the public. 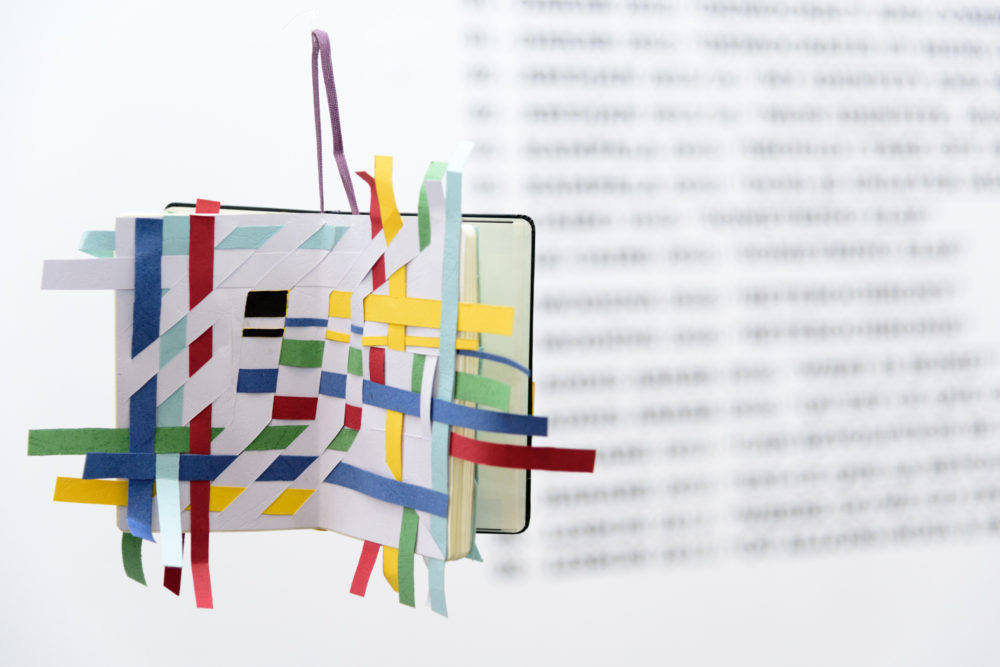 All notebooks from AtWork Douala Chapter 09